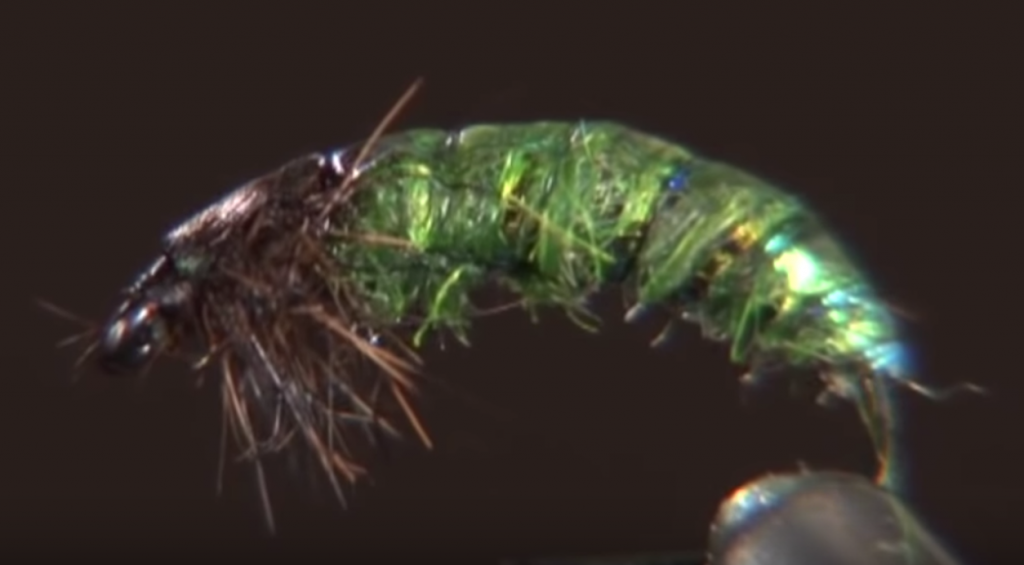 Setting up your flies for the Czech method.

You have a couple different options so you can run three flies which is great for big water deep water. It can be a little more problematic when fishing it wants to tangle a little bit more especially when you catch a fish.

When setting up that three fly method though you'll want to light fly on the very first dropper tag, the middle position second drop or down is going to be your heaviest fly. That way the Flies will actually sink in a V when they come down and you'll have a light slide on top and the heaviest fly your anchor fly is going to be in the middle position​
in a three fly rig.

When you're setting up a two fly rig you always want the heaviest anchor fly on the bottom or point position and then you can run a lighter offering up top, whether it will have a bead, not to be, no weight, a little weigh, it doesn't really matter in that top position.

The only time you would switch those flies around on a jack nymph rig, as well as a Polish or a French rig and even the Spanish, is if you want to fish some really shallow water and that bottom fly is going to hang up really bad in that six to 18 inches of water you're going to move your heaviest fly up to the dropper tag and run your lighter fly on the back that way with moving the rod up and down or back and forth downstream you can control the depth of your drift a little bit better because if you're trying to control the depth of the drift with the heaviest fly on the bottom then you're going to be lifting it to wear your top fly is not in the water. So shallow water you move that heavy fly up to the point.

What color flies do you fish

That's really your personal preference. The way I look at it is first I'll choose weight.
I try to color code all my flies with a little head or some kind of classification. I know how much these flies weight then as far as color choices we all know our home waters. Pick the color that you like. The color that you have the most confidence in my favorites are the catus greens, brown and orange woven nymphs, green and orange woven mints. There will be instances where I want to fish shrimp colored patterns and then I'll go with these super flashy flies. Sometimes we call those wilds or clown flies. They look like nothing in the river yet they're just there in a tractor. It's kind of like your flashback myths. But fly selection is completely up to you and then make notes when you fish a river and this fly worked really well on. This date make a note of it.
When you set up your flies you want to have them at least 20 inches apart, when I say 20 inches apart you've got to drop or tag. That dropper tag is going to be 8 to 10 inches. You want to let that dropper tag hang and from the point that it's at the bottom where the fly is attached to the tag from there 20 inches apart. Plus with having these flies 20 inches apart you can really control it back.

So, when approaching the river, you want to start you want to fish the edges. If you don't fish the edges of the river, you're probably going to walk across five or six fish that you could have called. These fish are tucked in next next to the bank with this higher flow and so you want to start low.
You got your flies in your hand, nice little loop down below your fly line to give you some tension and then very very very little fly line out the end of the rod tip. I've got my indicator and about four inches of fly line out so what we're going to do now I'm going to point my rod downstream and just kind of flip my flies out into the water.
I'm going to come to the one o'clock position and I'm going to pop it right in there drift; drift right at the very end of this drift we're going to give a quick position set it's an up and out to the one o'clock position. That way we can cast again go right back in the river. We're drifting drifting drifting if you haven't felt to take up and out as I'm casting this line into the water you can see that I instantly tighten up on it and start moving the rod tip downstream.
With the Czech Polish French or Spanish method flies hit the water they go to the bottom as you create that 45-degree angle with your line entering the water
You've got one fly that's tumbling across the bottom. Your other flight is kind of rolling up in the water column, so you're allowing the water to just roll that fly around on that dropper tag and it just looks like natural flies.
Drifting although these flies are not that natural looking it's more we're getting back into that. We want the fish to to take it not being selective but being opportunistic. So you're able to cover the water column. However high hold your rod or adjust it to get to these fish. So you can cover a lot more water with a lot less effort. The one thing you never want to do is bat cast these flies they're so heavy.
There's no taper on the leader so the power transfer coming from the rod to the fly line to the leader is pretty much killed what we're relying on is the weight on the end.
The leader from the Flies to propel these forward the Flies are ridiculously heavy and some of these are upwards of four grams apiece so when they hit the water it's like Apollo 11 coming back in for re-entry. So is that a presentation cast no you want to take these flies you want to drive them in the water wha you're relying on is the fast water that your fishing is actually deadening just about any sound that the fish will hear.
They'll pick up the splash sometimes with the lateral line and they'll think it's food. So a lot of times they'll swim right over there and eat it. But are you worried about delicate presentations?
With this method no so you want to bring your rod tip to the one o'clock position.
Lob cast it in tighten up on it the ultimate goal is to keep the line going into the water at a 45 degree angle and you're slightly pulling downstream like so. As you can see I'm crouched down I don't want to spook any of these fish if there any right here in this little side seam complete Czech ninfea.
You're going to get a foot two feet max above that fish or where you think fish might be you're going to lob it in there.